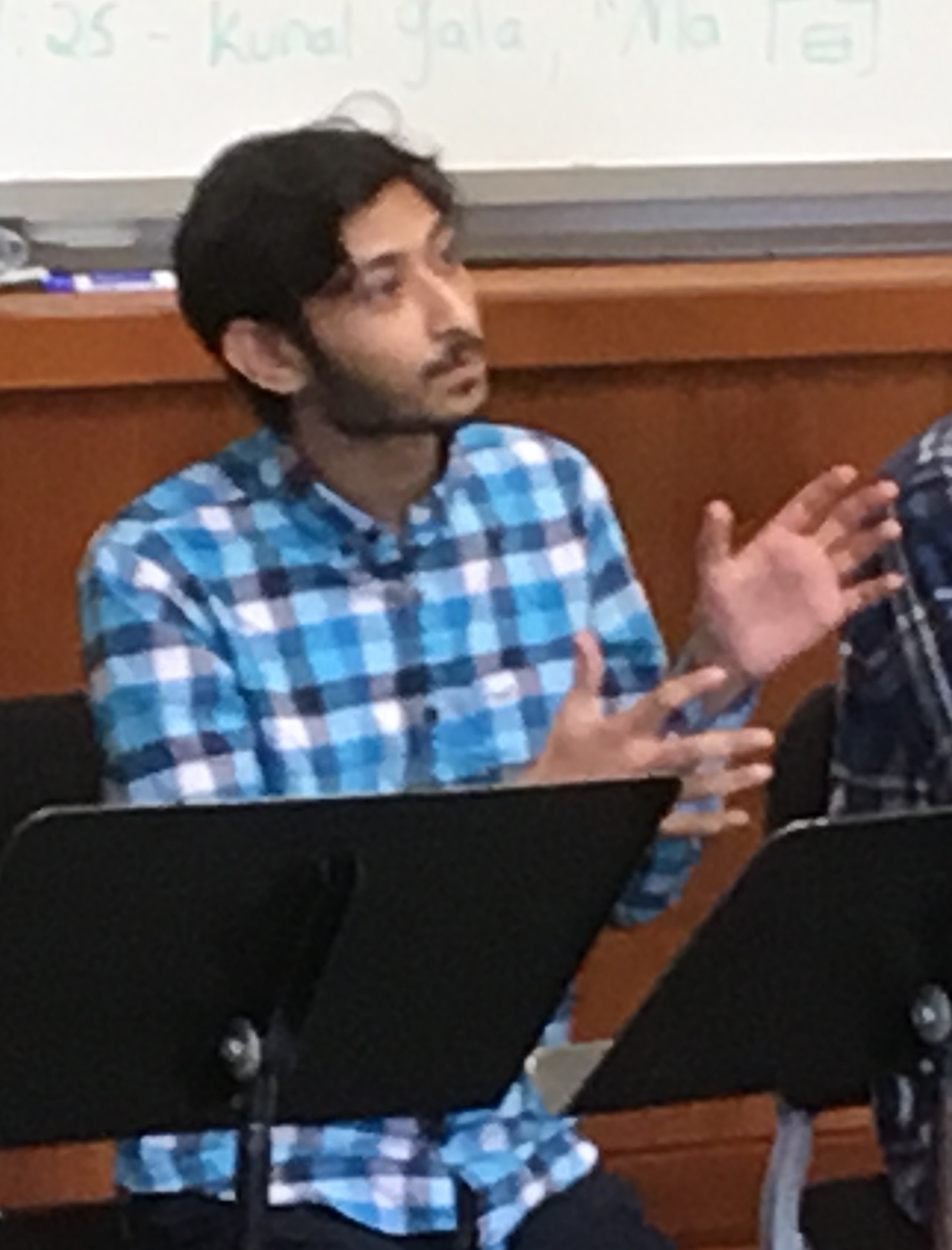 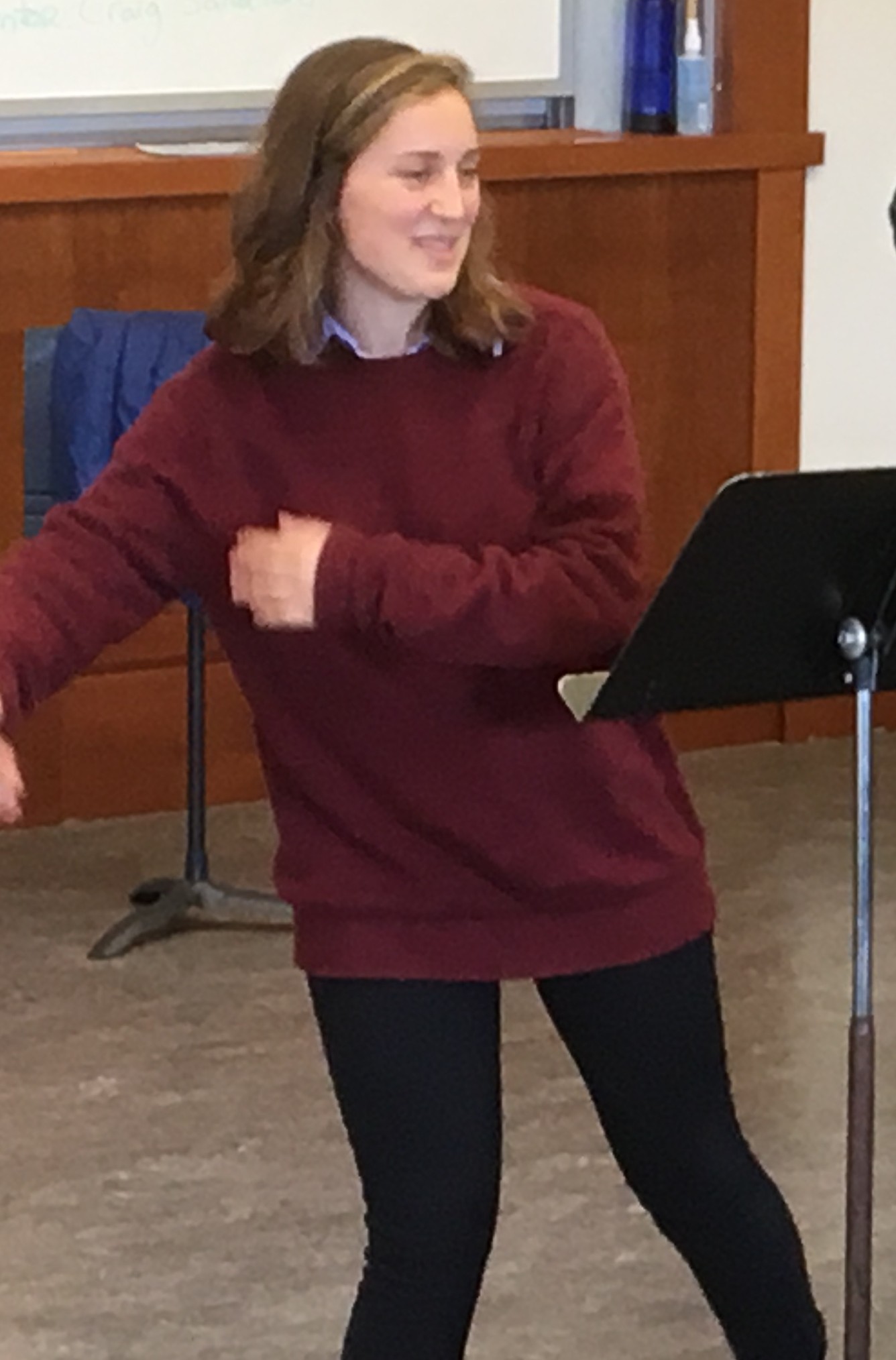 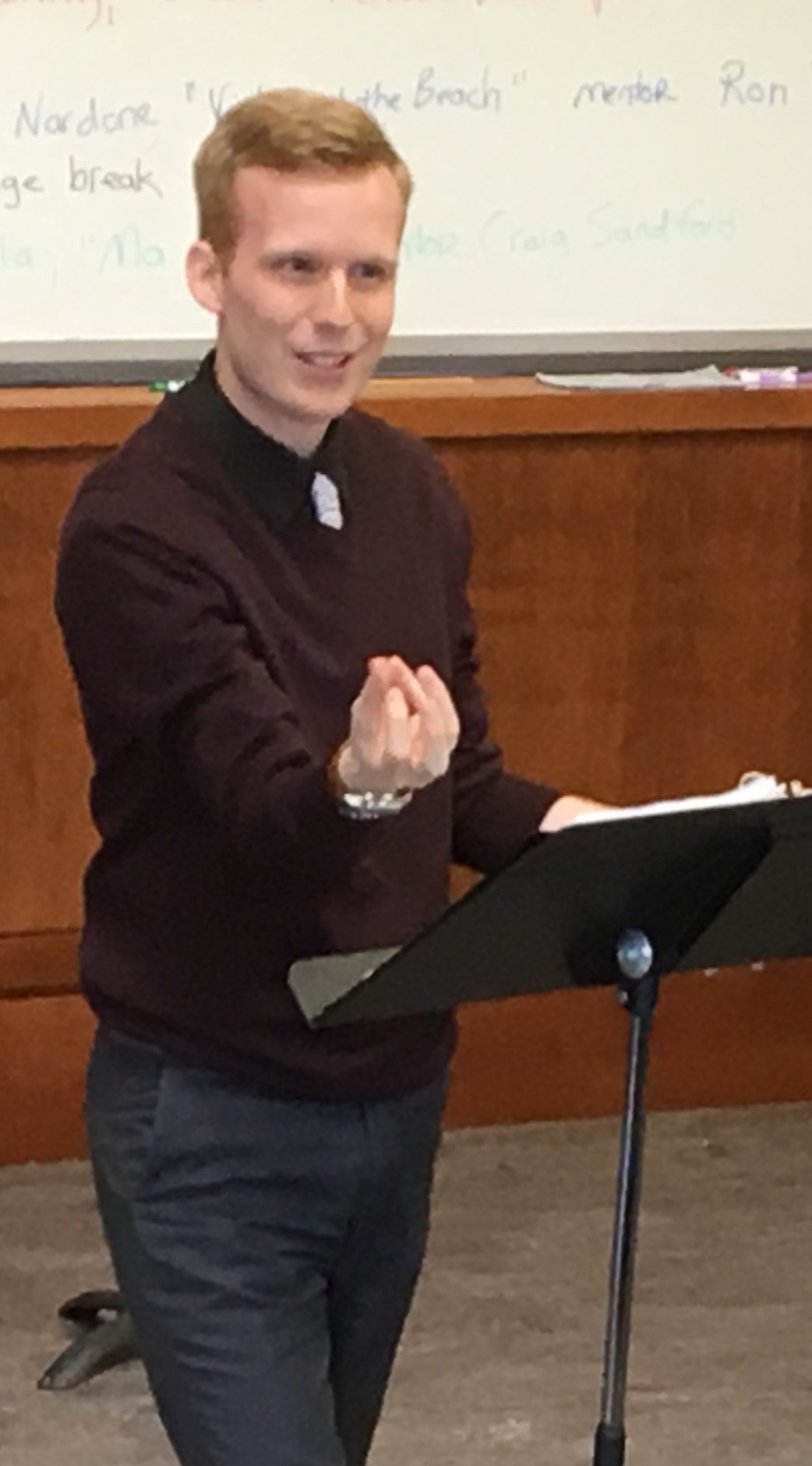 On a bright fall Saturday afternoon, Da Camera Singers hosted a workshop with the three winning composers in our commissions competition for 2018. From left to right above are Kunal Gala, Kelvyn Koning, and Katianna Nardone.

We sang through their pieces, listened to their critiques and suggestions, offered our feedback, and then sent them off to consider our recommendations for changes. We premiered their pieces at our January 20, 2019 concert in Buckley Music Hall, Amherst College, Amherst, Massachusetts.

This project was the brainchild of our conductor, Sheila Heffernon. Invitations went out in the spring of 2018 for submissions by New England composers thirty years of age or younger. The chorus auditioned the top six the following September and chose the three winners. The composers traveled to meet with us and work on the pieces with us at our October 13th workshop. Each composer was mentored by a veteran area composer, each of whom has premiered pieces with Da Camera in the past: Lewis Spratlan worked with Mr. Koning, Ronald Perera with Ms. Nardone, and Craig Sandford with Mr. Gala.

The project was made possible in part by the following two foundations: the Massachusetts Cultural Council and Choral Arts New England.

Feedback from our conductor. 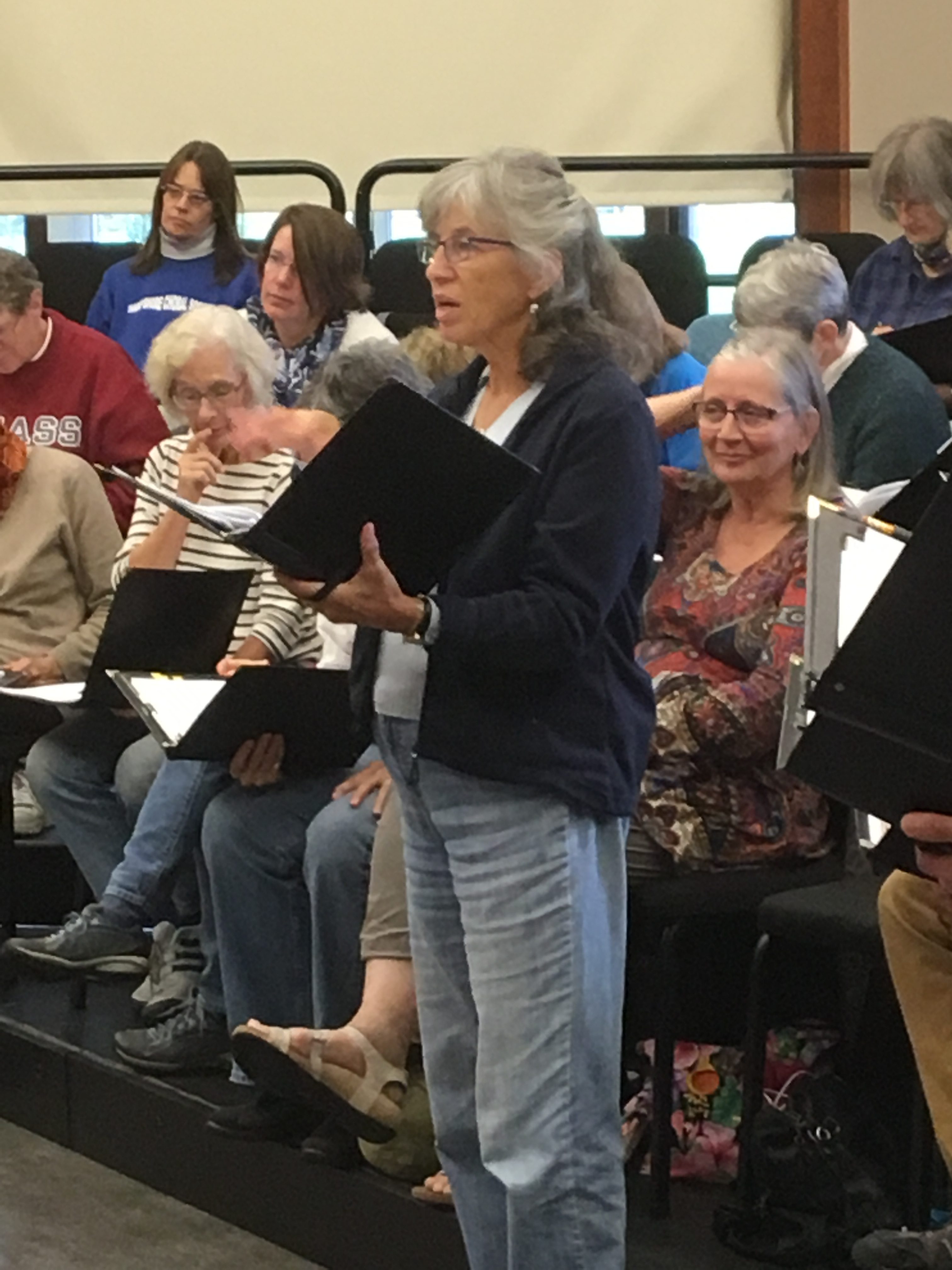 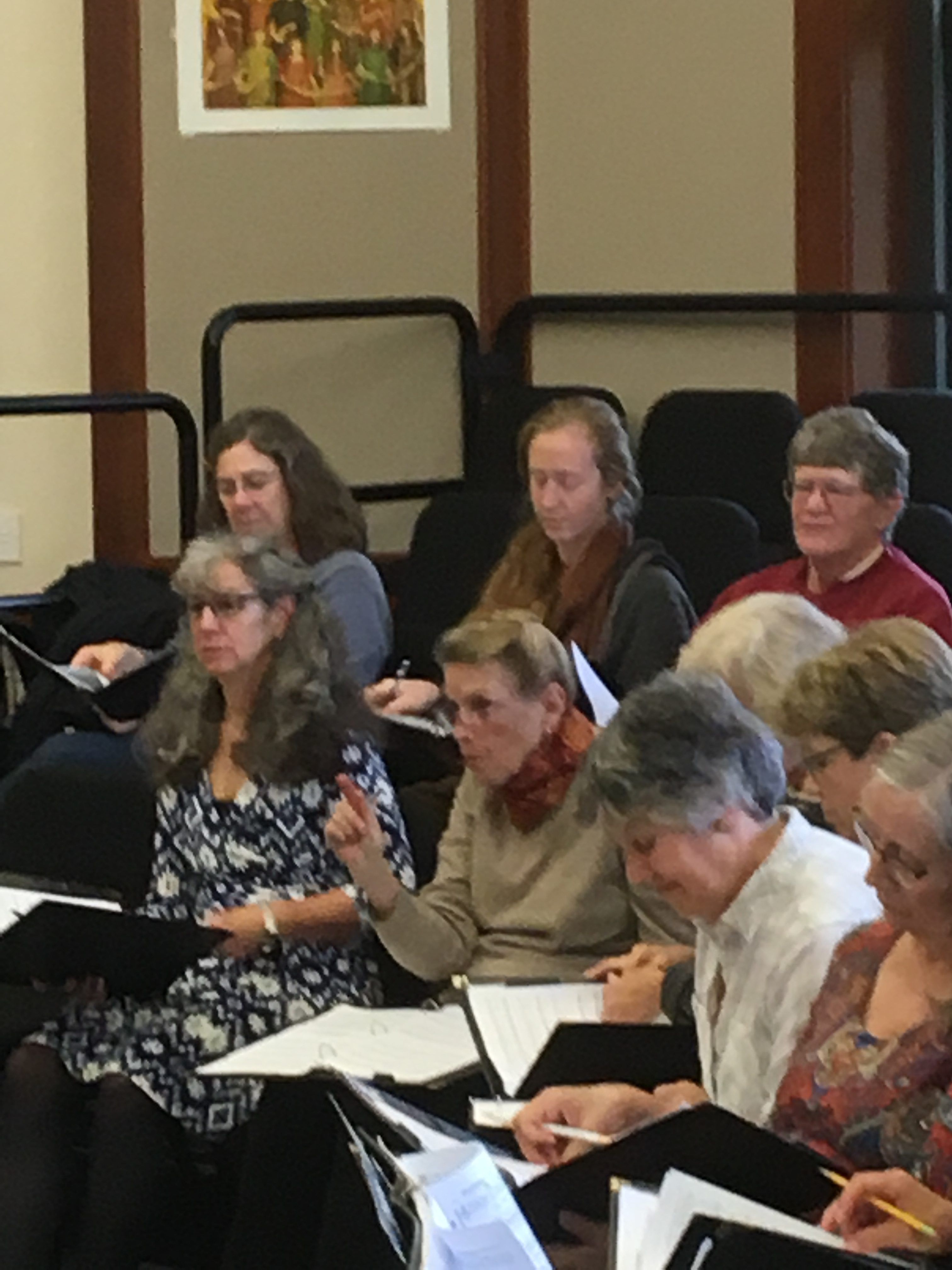 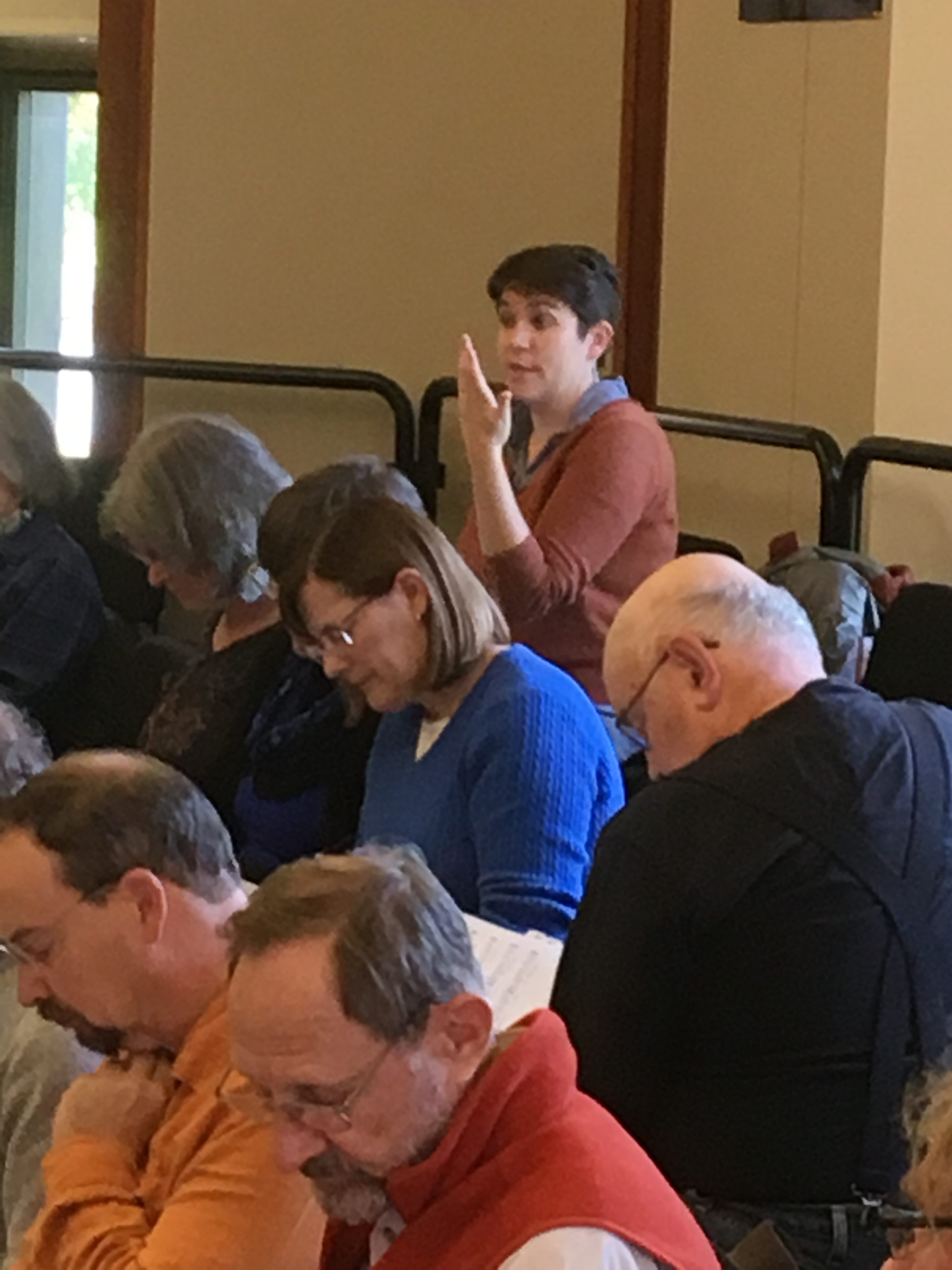 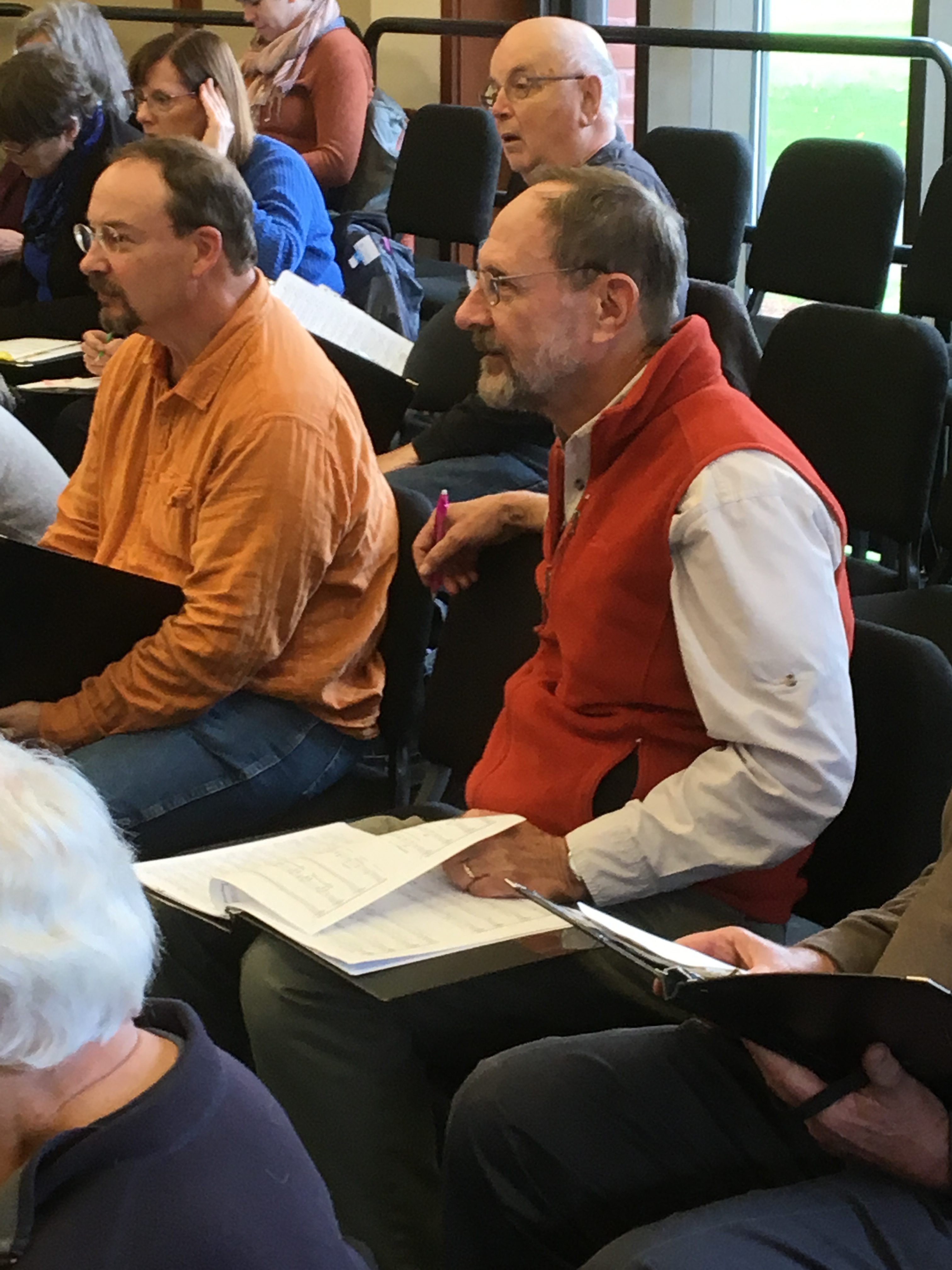 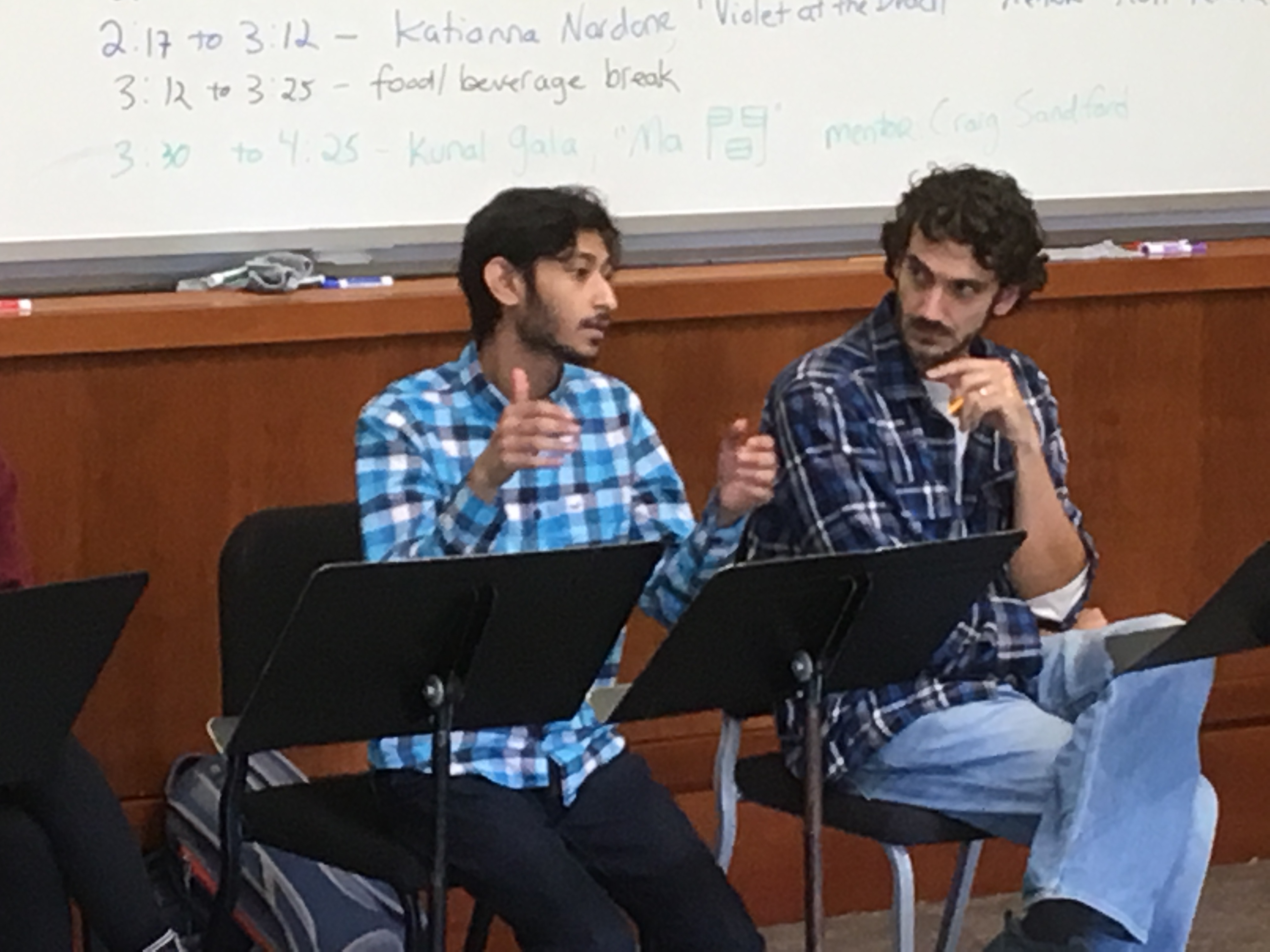 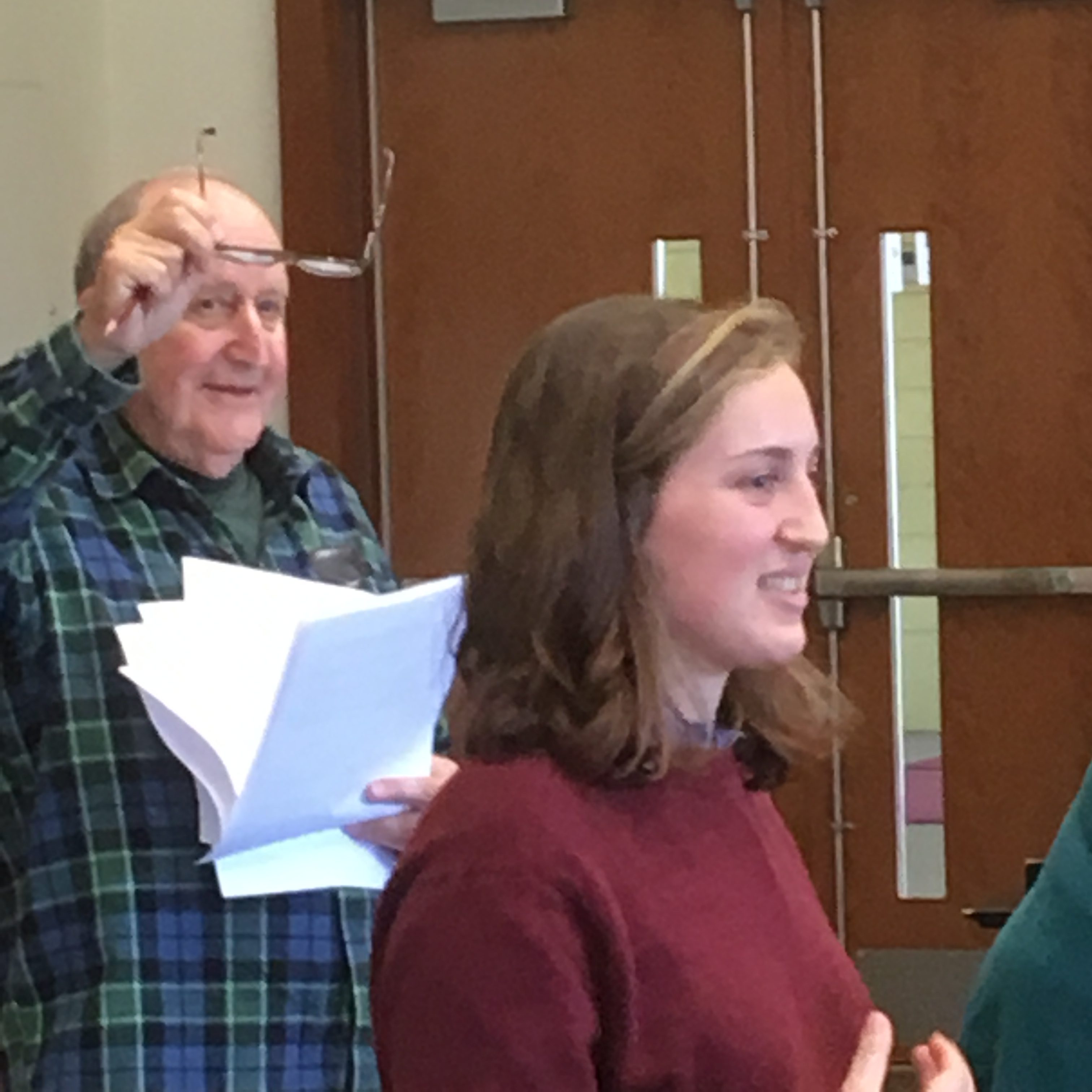 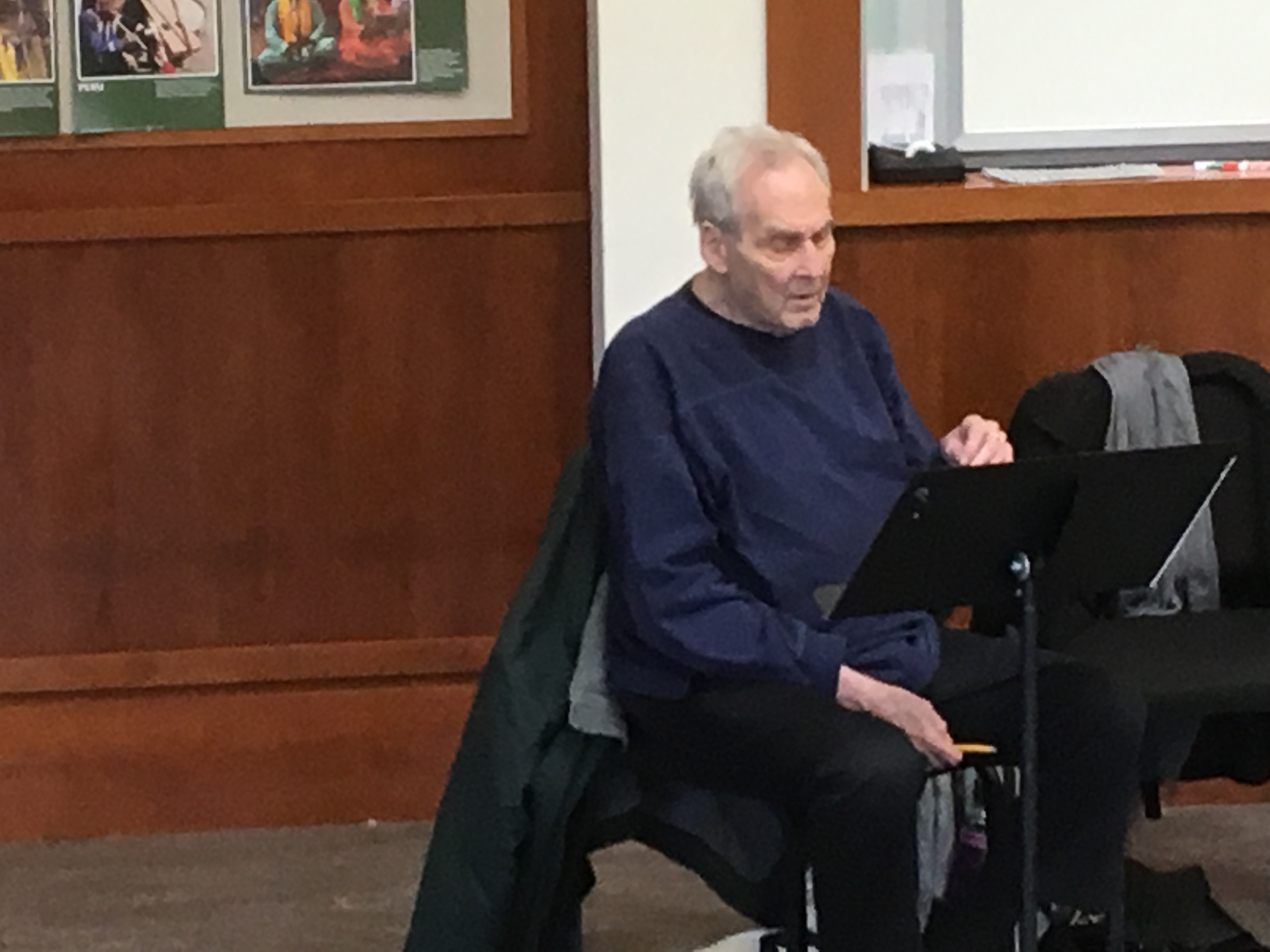 Below are some pages from the program for our concert on Friday, January 18, 2019 in Buckley Music Hall, Amherst College, Amherst, Massachusetts. All three composers were present as were veteran composer Ronald Perera, who mentored Ms. Nardone, and veteran composer Eric Sawyer, who assisted with the project in an earlier phase. 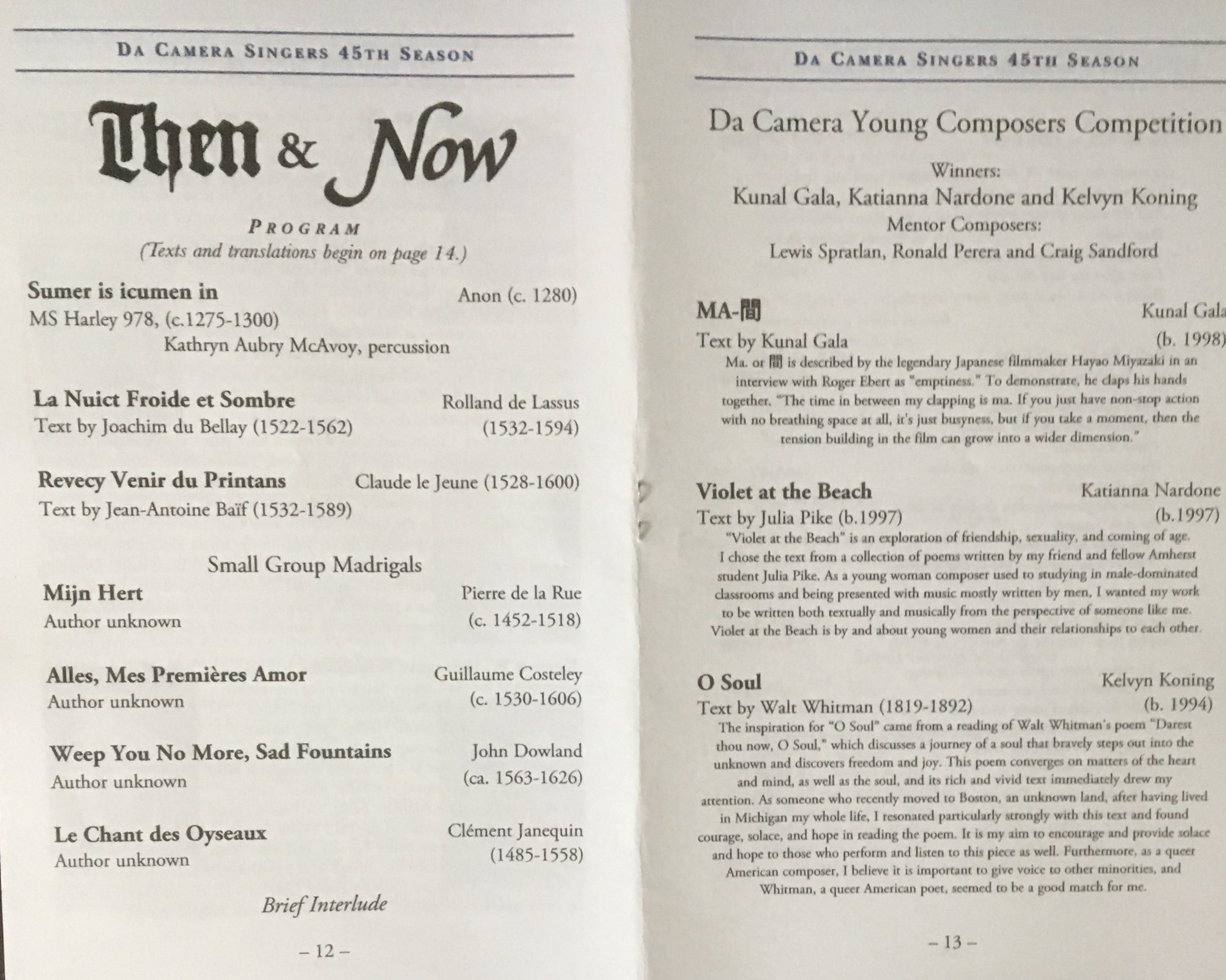 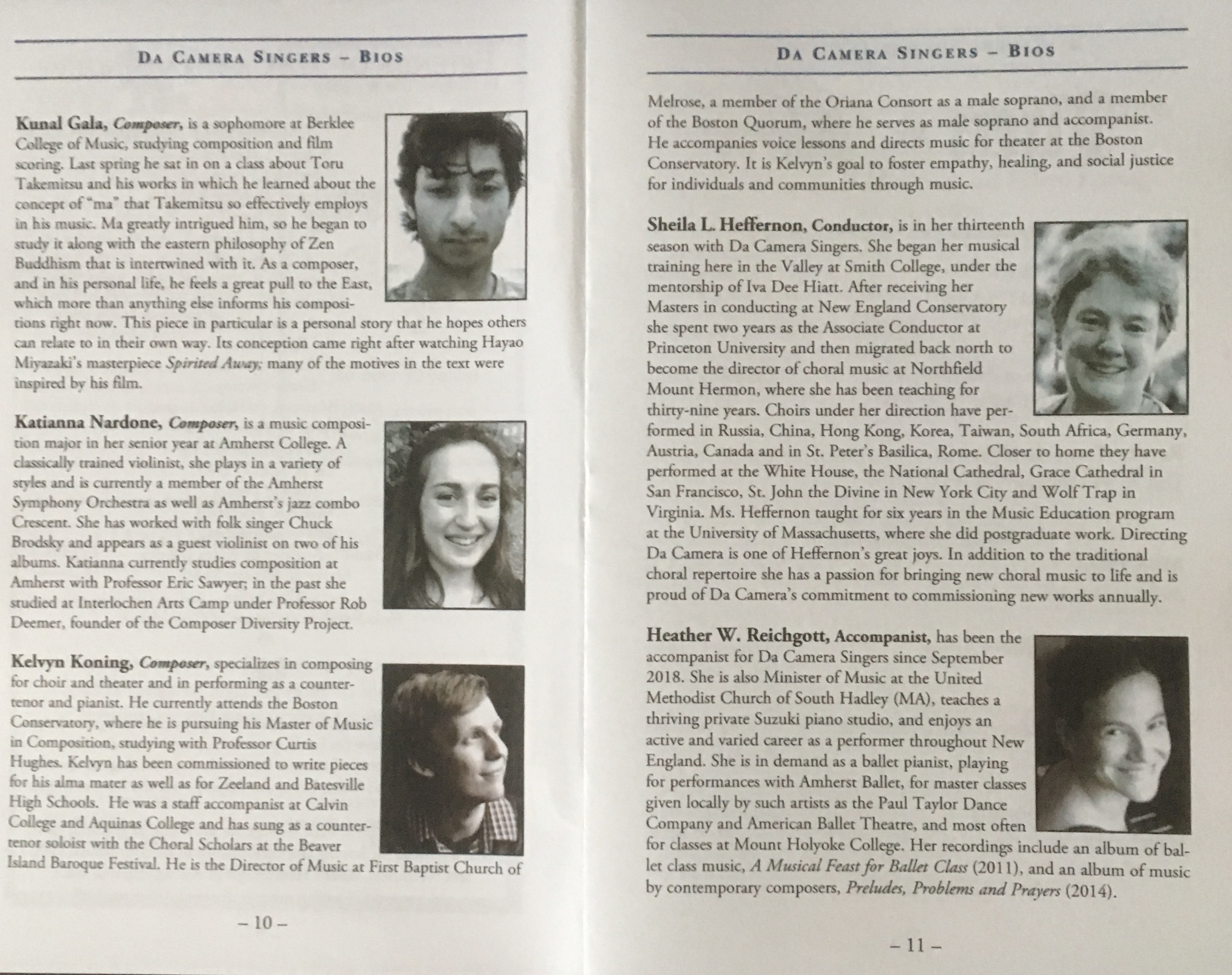 A second performance scheduled for Sunday, January 20th was canceled due to a major snow and sleet storm.

Read more about this concert at The (Greenfield, MA) Recorder